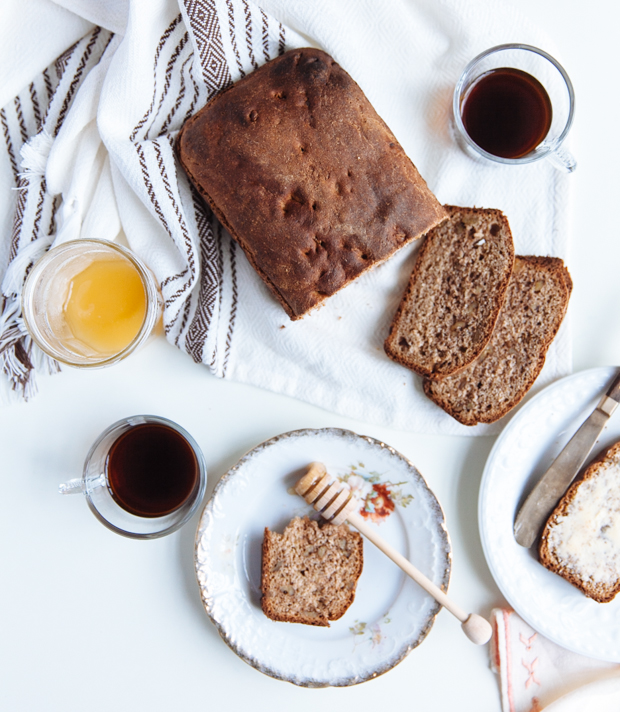 I always prefer going to the gym is early in the morning- as early as possible, so I can get it over and done with; also the relative quietness allows me to focus on my workout and my daydreaming about food- my favourite thing to think about when exercising.

A few days ago, while running, I decided it was time to bake bread again. Excited as I was, I dragged my exhausted yet inspired ass out of the gym and headed home to make a new loaf. 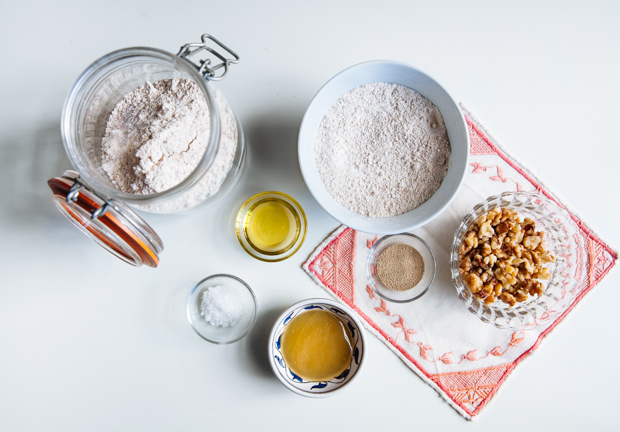 I don’t think I need to elaborate on why I love homemade bread. Even though I don’t care for pretty much any store-bought type, a freshly made, freshly baked loaf, always reminds me of the bread my dad used to make years ago. It was the most delicious thing I had ever tasted- and that was partly because my dad absolutely never cooks, so for him to make bread was such an exotic and unexpected treat, that we all savoured the mere act much more than the actual bread.

Today’s bread is not the one my dad used to make, since, after about a dozen times, he just stopped baking- and I’m pretty sure it was out of fear that we would ask him to contribute more in the kitchen. Anyways, this is a spelt loaf, inspired by the rye variety that my mom makes. It’s not the bread to end all breads. It’s simple and so tasty, with lots of walnuts for extra wholesomeness and texture.

Spelt flour is harder and nuttier in taste than other wheat flours, and slightly sweeter in taste; it’s also higher in fibre and contains less gluten, thus requiring less kneading and rising time. You still need to knead it and let it rise twice, so allow about 3 hours before serving your loaf. It’s absolutely worth it though: the smell of freshly bread is insanely good and this particular one tastes so delicious and wholesome, you’ll finish up the whole loaf in no time! 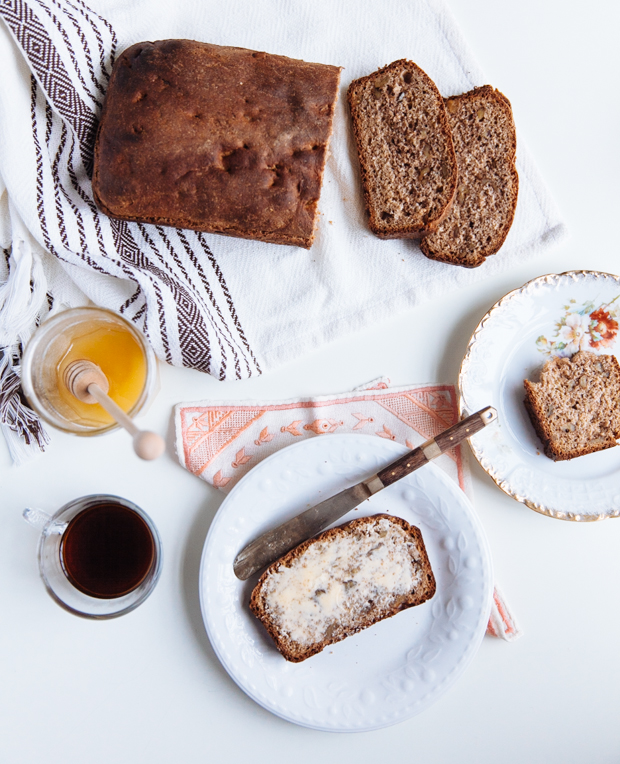 INGREDIENTS (for one loaf)

Mix the yeast with the 3 tablespoons water and set aside for 10-15’.

Mix the sifted flour with the sea salt and add the yeast mixture and the honey. Lastly, add the water gradually (start with one cup, stir and then slowly add 1/2 cup and a little extra more if needed). You want the flour to be incorporated, but the dough should not be wet, just slightly moist. Knead briefly, until the dough feels elastic, cover and let rise until about double in size, about 45′ (the warmer your dough gets, the faster it will rise. My mom always covers it with a tea towel and then either a small blanket or a chunky scarf).

Once the dough has doubled in size, take out of the bowl and place on a floured surface; add the walnuts and olive oil and knead until incorporated and the dough does not feel too sticky, but elastic and quite silky (to test, yet your fingers lightly and touch the dough- if it turns a little ‘milky’ in colour, then you can stop ).

Place in a well-oiled loaf pan, cover again as before and let rise until almost double in size, for another 45’.

Well before the rising time is up, turn the oven on to 220C; place the pan in the oven and bake for about 40’, or until it feels lighter when lift in and sounding hollow when tapped (if your loaf starts to brown, you may need to cover loosely with foil halfway through).

Take out of the oven, let cool slightly and remove from the pan. Place on a cutting board, let cool further and slice.

(To store: wrap in a kitchen towel- it will go stale fairly quickly, but it freezes beautifully, so it’s well worth making two loaves while you’re at it)